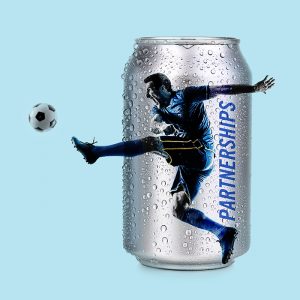 How Brands and Teams Both Benefit from Ad Partnerships

Brands and Sports Teams Can Score Big Points Together

Your brand and your favorite sports team have a lot in common. Your office may not look like their baseball diamond or stadium, and their uniforms may not fit within your day-to-day dress code, but you’re not as different as you think. At the end of the day, you both have a common goal: to reach as many people as you can.

Your brand knows that what it stands for is worth being heard and that viewers and listeners will be happy they found it. On the other hand, your token team believes in the power of its sport and the quality of their players so strongly that they know that spreading their name is the best way to bring the joy of what they do to the world. And a powerful game plan can tie these two together and score big points for both your brand and a sports team.

Some of the most iconic ad campaigns have brought together heavy hitters from the sports and advertising world to create unforgettable content together. There’s a reason why brands and teams have been close friends for so long. Where other forms of brand marketing fail, sports partnerships excel.

Take, for example, the issue of demographics. Massive brands want to reach everyone. However, that’s much easier said than done. These big brands’ marketers must find ways to appeal to broad and niche markets simultaneously. With 63% of Americans saying they’re active sports fans, teams provide a clear path to reaching a massive audience. It then becomes important to recognize that, while most Americans identify as sports fans, they’re watching a wide variety of sports.

What sport do you think is playing in most American homes on a given day? It’s a trick question. There’s no single sport that the majority of sports fans claim as their favorite sport to watch. The most popular, American football, is only named by 37% of sports fans as their favorite sport to watch. Basketball is a distant second in the popularity contest, followed by baseball, auto racing and figure skating.

Even without a degree in statistics, it’s fair to say that the Venn diagram of football viewers and figure skating fanatics doesn’t have a lot of overlap. That’s where ad partnerships between brands and teams shine. Big brands want to reach football and skating viewers alike, while teams love the platform brand partnerships give them to pitch the joy of football to a skating fan who’s not quite sure what a first down even means. A branded championship can give resources to reach a much larger audience and with that the chance to create new fans.

Brands and teams love dedicated fans that tune in regularly to watch their favorites take home a W, but there’s another huge market out there in sports: big championship viewers. Huge events such as the Olympics, World Cup and more earn astronomically high ratings and can be a dream for both parties in an advertising partnership.

With the 2018 World Cup around the corner, brands are clamoring to be a part of the action. In 2014, the competition amassed over 3 billion viewers worldwide. With massive events like this, brands have the opportunity to reach about half of all global humans, and in return, provide financial resources to make these events possible.

Next time you’re watching your favorite team (from the grandstands or your not-so-grand living room), take a second to evaluate their partnership potential for your brand. You may be missing out on a great new opportunity.