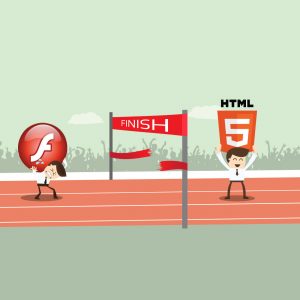 Flash in the Pan: Why HTML5 Reigns Supreme

Starting September 1, Google announced it will automatically pause most Flash elements in Chrome. That means expandable banners, interactive videos and homepage takeovers done with Flash will appear as still images unless visitors have downloaded the right software, all but sealing the platform’s fate. How did what once was an innovative software end up receiving such backlash and wide criticism? And what does that mean for advertisers?

The Beginning of the End

The declining usage of Adobe Flash in favor of HTML5 has been occurring for quite some time. In fact, the deciding moment of its bleak fate can be drawn back to an open letter Steve Jobs penned back in April 2010. When Jobs declared that Apple devices would not support Flash and “HTML5 will win on mobile devices (and PCs too)”, the slow roll out seemed inevitable.

In November 2011, Adobe nixed Flash on mobile devices to focus on PC browsing and mobile applications. Even going so far to say that HTML5 is the future, the developer all but denounced Flash. Cut to January 2015, YouTube publicly named HTML5 its new default web player for Chrome, IE11, Safari 8 and beta versions of Firefox, leaving Flash in the dust. YouTube, then the biggest provider of Flash video, made an executive move that rippled in other major companies. Chrome initially auto-blocked most Flash elements on portable devices in June earlier this year, followed by Firefox blocking Flash outright in July. In September, the Interactive Advertising Bureau reinforced the Flash block out by updating its guidelines to focus on the best HTML5 practices.

Advertising in a Flash-Less World

The most concerning piece for advertisers, following Google Chrome’s block of Flash this September, is the now static display of rich media using Flash. Expandable banners, interactive video and homepage takeovers are all examples that, if done with Flash, will appear as still images on Google Chrome. Combined with the additional downloading of the software, the images will not “play” unless clicked on, another step for the unassuming and unwilling user.

For advertisers, the focus is not just on visibility but also on security. Last month, Yahoo’s advertising was hacked because of its use of Flash on its home page. The malvertising took advantage of a breach that took users’ computers hostage or sent traffic to fake sites to siphon ad spending. Alarmingly, the action doesn’t require any user interaction—just merely browsing the page will silently affect a computer. The attack of one of the biggest online publishers is the latest in a string of malvertising happening over the course of the year. Up a staggering 260%, even Malwarebytes’ senior security researcher said that not all attacks can be caught before they happen.

With no need to install, HTML5 is the simpler option and the language of the Internet—everything is built on it. Open-sourced and widely used, HTML5 also trumps Flash’s closed, proprietary system highly susceptible to malicious attacks.

A series of hacks exposing security issues and “malvertising” will put the nail in the coffin to any platform. Flash may not be dead yet, but that doesn’t mean you should wait until it is.