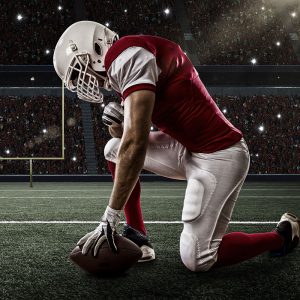 What’s a ‘small’ school to do when they’re determined to secure a high school athlete against recruiting leaders like The University of Alabama’s Nick Saban? Social media. There is no doubt that college football is arguably one of the most successful business models in the world. The fundamentals of the game haven’t changed much, but the emphasis placed on recruiting is more important than ever. Schools from around the nation are competing for the best of the best in young, talented athletes and the rivalries between programs are becoming more transparent. For perennial powerhouses like Alabama and Florida State, recruiting is a relatively simple process as the name itself carries most of the weight during the recruiting process. But what happens when a lesser-known program, such as Vanderbilt or Washington, tries to compete with the ‘commanders-in-chief’ of recruiting? The bottom line – until recently, they couldn’t.

The tides have turned in the college football recruiting process, and it’s all because of how social media has allowed these schools to have equal access to players across the nation. According to Andrew Kulha, Bleacher Report journalist, “The world of college football recruiting is ever-changing and schools try to gain any sort of competitive edge they can. Social media is the key to unlocking the secrets of powerful recruiting. It’s the low hanging fruit, if you will, for coaches and coaching staff who are willing to put forth the effort, but may not have the rich recruiting history to back them up. The ugly truth about sports is if you don’t have ammo to back up your proposal, consider yourself irrelevant in recruiting. This is where social media can help schools, with limited recruiting backgrounds, tout powerful and influential pitches to young athletes.”

Not a believer in the influence social media has on recruiting? Consider the usual suspects who remain relevant in college football. A rich history in athletics is always one of the key factors in trying to recruit a player. The huge fan base, a prosperous academic community, and an electrifying, state-of-the-art facility are all part of influencing a recruit to attend the school. However, those factors only go so far. The real key is communication. A high school athlete wants to feel important; He wants to feel like he is the center of your universe. The most powerful and efficient form of communicating with Generation Y athletes (or anyone in this age group) is through social media.

There are several proven instances where the Internet has played a major role in recruiting success for lesser-known programs with a limited budget.

Take Vanderbilt as an example: a history-rich academic university, but a relatively new player in competitive recruiting. With Vanderbilt being a member of the illustrious South Eastern Conference (SEC), recruiting can prove to be extremely difficult for the school as they compete against Alabama, South Carolina, and Florida in securing recruits. Vanderbilt, however, has seen a surge in four and five-star recruits on their freshman roster within the last five years. Coach Herb Hand has helped bring life back to the program. Hand has taken the Commodores from a two-win season in 2010 to a nine-win season in 2012. What’s changed to produce such a notable program turnaround?

Much of Coach Hand’s success can be attributed to a surge in team talent. That talent was once a recruit, who had to make a decision between schools. There is a reason why those players chose Vanderbilt as their school of record. Coach Hand says, “The access is 24/7.” What he means by this is that strong and continued communication with the recruits is the best thing you can do to gain their attention and earn their respect. It’s a balance between traditional marketing tactics and technologically savvy connections. “The overnight emergence of social media – in particular Facebook and Twitter – has created a new world in recruiting, one without a defined blueprint,” says Bleacher Report writer, Adam Kramer.

Coach Hand connected with those high school players on a deeper level, much more than what his competitors were doing. He has recognized the generational shift in young adults’ ways of communicating. “Our target audience is kids who are ages 15 through 18, and social media is where they are communicating,” says Hand. Alabama head coach Nick Saban has publicly acknowledged the fact that he has no idea how to send a text message, let alone a tweet. Its this type of disconnect that allow coaches such as Hand to capitalize on their competitors’ recruiting flaws.

In 2010, Vanderbilt landed Kenneth Ladler, a three-start recruit from Stone Mountain, Georgia, who had previously planned on attending South Carolina. He signed with the Commodores on signing day, proudly placing that hat on his head. Through creating a strong relationship with Coach Hand, he felt that Vanderbilt would be his ‘home away from home’. “I don’t want it to be just about X’s and O’s, because that’s not the type of relationship I have with my players,” Hand says. Earlier this year, Coach Hand crafted a creative tweet to high school players that has caught the attention of many. It states: 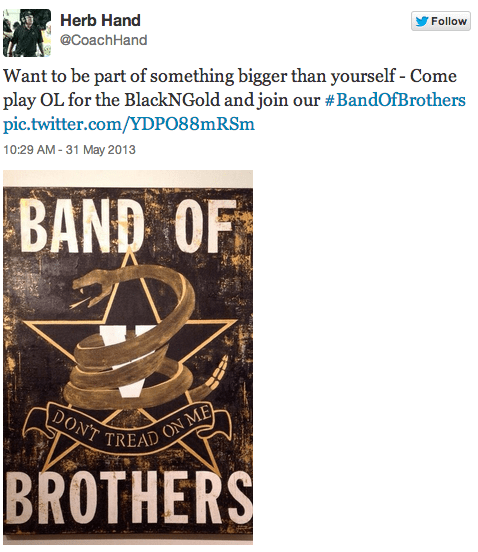 While Coach Hand is sending out tweets with clever hashtags and creating meaningful relationships online, Alabama and South Carolina have yet to expose real expertise within the socialsphere.

Many more coaches have also bought into the idea of social media marketing as a strong recruiting tactic. University of Washington Head Coach, Steve Sarkisian, has taken the time to understand what social media has to offer the program, “It took a couple of years to get most of our coaches to buy into social media, but their presence in the Twitterverse has helped tremendously.” Boston College Head Coach, Steve Addazio, utilized social media to implement a branded hashtag campaign to catch the eye of recruits. He created the #BeADude campaign, a phrase he ‘borrowed’ from the mantra of Don Brown. Addazio says, “We are following what’s going on in competitive schools, what’s going on in recruiting, what’s the chatter, what’s the buzz. We use it for marketing, we use it for information and communication, and right now we are back in full stream.”

All of these coaches have one goal – to win. The college football industry no longer survives on just a name. You have to put yourself out there, make a splash, and allow people to engage with your football program – or on a larger scale, you’re brand. Many businesses can learn from this stream of underdog success. Social media gives any company or brand, no matter the size, the opportunity to equal the playing field against their competitors. The same competitive edge that coaches are seeking for their college football programs is the same advantage that businesses strive for when dealing with competitors.

As a business, there is much to take away from this example of success in reaching your market via social media. Companies should consider their overall marketing goals, and how a social media presence fits within an overall marketing plan to achieve these goals. Much like Coach Hand, through creating easy-to-access touch points with consumers, brands are growing their customer bases and creating lasting relationships with people they were previously unable to reach before social media’s existence. As Digital Sherpa writer, Justin Fishaw says, “People prefer to do business with other people, not just the brands themselves.”

Additionally, social media helps businesses angle themselves as experts in the field. Like Coach Hand, businesses must be present, both speaking and listening, on social media. Just as he was able to build relationships and trust with the recruits, studies show that social communities built trust and loyalty to brands, as well. In fact, a study conducted by Ian Greenleigh showed that 84% of millennials turn to online communities before making a purchase. Additionally, 85% of consumers say they will change their shopping behavior in response to social media content. Communicating in online communities is the low-hanging fruit of the 21st century. Social media is a proven tactic for driving sales, earning leads, and closing deals.