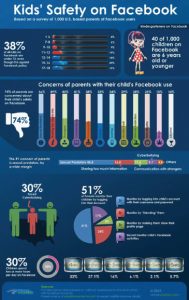 It is no secret children have been using Facebook already. According to a 2011 Consumer Reports survey, roughly 7.5 million children under the age of 13 have already created Facebook accounts by entering a false birth date, and of those, five million were under the age of 10. In fact, many of these accounts are being opened with the knowledge of parents. A Microsoft study found 36 percent of parents surveyed assisted or were aware of their children signing up for Facebook before they turned 13.

It is these stats and Facebook’s potential policy revision that has some lawmakers and privacy advocates concerned this will open new opportunities for cyberbullying and the release of data into the engine that drives Facebook’s advertising business. Facebook maintains they are not attempting to open the site to access a new pool of revenue. In a statement from Facebook (according to a June 5, 2012, Hispanic Business article): “…a company statement hinted the technology will help parents proactively oversee children’s activities and discourage kids from lying about their birth date to sign up. ‘Many recent reports have highlighted just how difficult it is to enforce age restrictions on the Internet, especially when parents want their children to access online content and services,’ the company said. ‘We are in continuous dialogue with stakeholders, regulators and other policymakers about how best to help parents keep their kids safe in an evolving online environment.’”

However, there is an obstacle preventing them from opening the site to kids: the Children’s Online Privacy Protection Act (COPPA). Complying with COPPA is challenging, labor intensive and expensive; therefore, many sites simply ban anyone whose stated date of birth indicates they’re under 13. Though, it is easy to provide inaccurate age information, and there is generally no accepted way to verify. Furthermore, federal law prevents the access and release of private information for children under 13 years old. Facebook Ads revolve around personal data for enhanced marketing success for advertisers. Based on COPPA, this would require Facebook to offer parents the option to disable online activity tracking by any brand or company.

Minor Monitor, a free parental control monitoring software for Facebook, conducted a survey of 1,000 U.S.-based parents of Facebook users and determined the following: 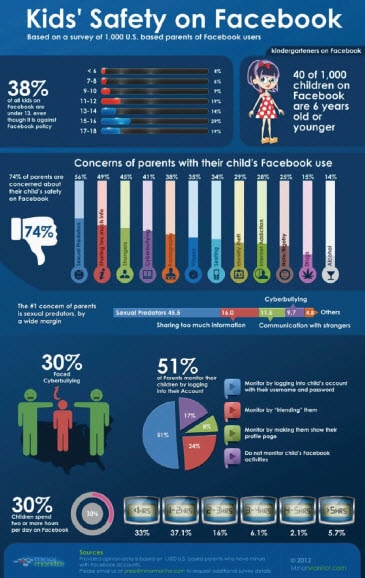 Their findings uncovered 38 percent of kids on Facebook are under the age of 13. Also, the main concerns or disadvantages ranked highest by parents are: sexual predators, releasing too much public information and cyberbullying.

Those proponents of this policy change, believe kids will benefit from: educational development, digital competence and a new opportunity to build social skills. Many, including Monica Vila who founded, TheOnlineMom.com, see minors on Facebook as an opportunity for self-expression and to gain selfesteem, and knowledge of navigating the Web.

Facebook has not taken action yet but continues to explore privacy settings and linking capabilities to allow minors to join its social network. Stay tuned for more on this hotly debated topic among parents, lawmakers, privacy advocates and advertisers.