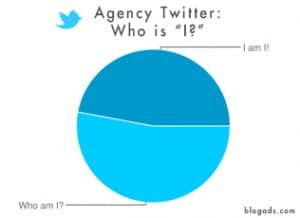 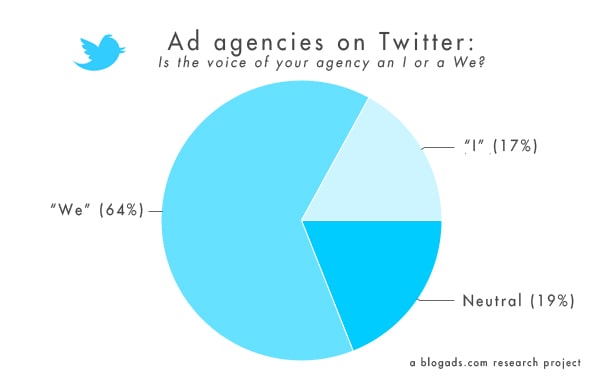 When you’re tweeting for a 10,000 person ad agency, should your tweets be written in the first person or the third person?

We hosted a SMWNY Social Media Week called “The voice behind the curtain,” at which we asked four intrepid ad agency tweeters to share stories and insights about representing entire organizations of creative geniuses on Twitter. One discussion that ignited the audience’s twitter-feed came from a simple question: is your agency an “I” or a “We” on Twitter?

So “we” decided to look at the voice of the 100 most-followed ad agency Twitter accounts. Here’s what we found. 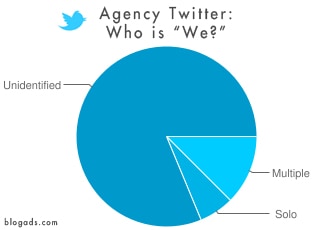 “We” is by far the most-used pronoun for agency Twitter accounts, which makes sense when you consider that the account often represents a company of many people.

Some Twitter accounts specify the authors’ names. Of the 64 “we” accounts, eight list multiple people tweeting, which further validates the use of the plural personal pronoun.

But what about that other slice in the pie? Four of the “we” accounts give a byline tweets to a single person at the agency. So are the individuals behind @McCann_NY,@W2Optimism, @4As and @McCann_WG making a conscious effort to call themselves a “we?” Was the plurality established when the account was started, or did it evolve over time?

Average ratio of following/followers for “we” tweeters: 23% 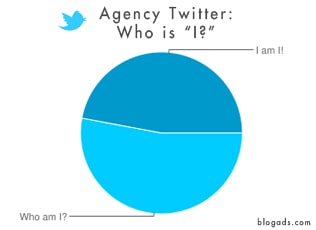 According to the “Flawesome” trend, consumers in 2012 expect brands to be more human, exhibiting traits like humor and empathy. It stands to reason, then, that the agencies who are advising their clients’ brands to be Flawesome would affect the same sense of humanity with their own brand.

One way that an agency can show a human side is by calling itself “I” on Twitter. For some smaller shops, for whom the president or CEO is literally the face of the agency, using the “I” pronoun is a natural and logical fit.

Some agency accounts use a mix of “we” and “I,” using the former for tweets that represent the entire agency, and the latter for “at replies.” But something feels unnatural about not knowing who “I” am — er, who “I” is… are…

Of the 17 “I” agency Twitter accounts in the top 100, only eight give individual agency folks bylines for the tweets.

Update 3/1: The tweeter behind @madebymany has revealed himself. Thank you, sir!

@blogads I is I

Average ratio of following/followers for “I” tweeters: 48%

The majority of the most popular agency Twitter accounts has chosen a side in the “We” vs “I” debate. However, we did find 19 accounts that either refer to themselves in the third person or not at all. Some of them are clearly auto-feeds from Facebook or a blog; other agencies just really like to make the pronoun omission popularized by the likes of LeBron James, Elmo, andSeinfeld’s “The Jimmy.”

Who is “we?” This post was written by Nick Fabar based on research