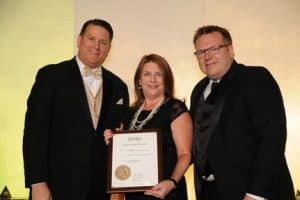 ORLANDO, FL. – (September 4, 2014) – Evok Advertising took top honors for its work with its clients in the travel and tourism and non-profit sectors at the 76th Annual State Convention of the Florida Public Relations Association held in Orlando.

Evok was presented the Award of Distinction in Public Relations Programs and Community Relations for the National Mobility Awareness Month (NMAM) Campaign and a Judge’s Award in the Printed Tools in Public Relations for the campaign it developed and implemented for client National Mobility Equipment Dealers Association (NMEDA), based in Tampa, Florida.  The NMAM awareness campaign in 2014 garnered more than 1.3 billion media impressions, that resulted in 15 wheelchair accessible vehicles being awarded to Local Heroes across the U.S. and Canada.

Evok advertising, already recognized among the top advertising and public relations agencies in Central Florida, is listed in Forbes as a top-100 global agency that “knows social media and Google” and the number one followed I-Brand agency on Twitter according to BlogAds.  Evok . . . Ideas. Work. Results.