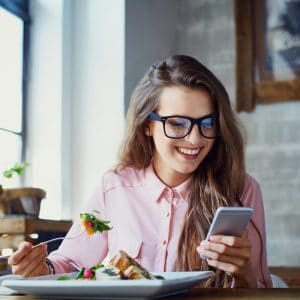 Gen Z Is Entering the Workforce with A Big Appetite

How to Win Over the Digital Natives

It’s 2018, and the first batch of Generation Z students are graduating college and entering the workforce. Also known as the Net Generation and Post Millennials, the digital natives were born after 1996 and currently hold about $828 billion in spending power. They currently make up 26 percent of the population and are projected to grow to 40 percent by 2020, so they’re definitely worth getting to know.

Marketing your restaurant to Gen Z might be easier than ever based off of one overall fact. Generation Z loves to eat. They love to eat so much that they spend more money on food than on clothes.

UNiDAYS conducted a survey of 1,800 students to analyze their spending habits when it comes to food and were able to conclude a few key facts.

About one half of their participants said they spend up to $20 when eating out with 15 percent spending more than that. The Post Millennials aren’t swamped with as many bills as older generations, such as mortgage, rent and children so they have a decent amount of disposable income to spend on some yummy meals.

Since Generation Z is resistant to advertising, how do restaurants promote new menu items to this generation? Forty-one percent of the Generation Z survey participants said they found out about new menu selections and promotional offers while visiting the restaurant with the remainder through social media, friends and family.

With Gen Z, it might be time to reevaluate your marketing strategy. A community-based approach might be more appropriate to target this generation as they are likely to ignore digital display ads.

Taking a community-based approach has other benefits. Generation Z, similar to Millennials, like to feel special. Offering incentives for specific communities where they are the most populous and engaged, such as college towns, can yield a deeper understanding of this audience segment’s preferences and behaviors

You Have to Capture Their Attention

The Gen Zers that have the most spending power aren’t the ones that live at home and have daily home cooked meals. They are in college and/or entering the workforce. They’ve grown up with smartphones and have cultivated a lifestyle that requires to have them in hand or pocket wherever they go.

Because of this, marketers have to tweak their strategy to conform to the preferences of this growing generation. With push notifications, mobile coupons and social ads, it’s no wonder Generation Z has an attention span of eight seconds and a desire to hunt for deals and new promotions. It’s up to restaurants to figure out how to win them over in those eight seconds and keep them coming back.

New Restaurant Consumer Trends to Watch for in 2023

Your customers don’t want to just hear the specials, they want to experience something special. In an age where technology has allowed everything to be tailored to our preferences, your guests have come to expect dining experiences that do the...

Restaurant Marketing Trends: Food Service Loyalty In The US For 2022

After months of inconsistent and uncertain restaurant visitation, the foodservice industry continues to battle the labor crisis, supply chain issues and the impact of inflation, all of which compromise restaurants’ ability to meet consumers’ expanded needs for high-quality offerings and...

From the moment your customers take the first bite of one of your unique dishes, they’re hooked. The problem is that if your target audience never hears about your restaurant, they can’t experience your culinary prowess. So, how do you...

How can I better engage with my customer base? Is there a quick and easy way to ramp up my website traffic? What do I have to do to get some positive Yelp reviews? If you’re a restaurant owner and...

Sixty-five million years ago, an asteroid impacted the Gulf of Mexico and wiped out most of the dinosaurs. The remainder slowly evolved into what we now know of as birds in order to survive. Since early 2020, restaurants large and...